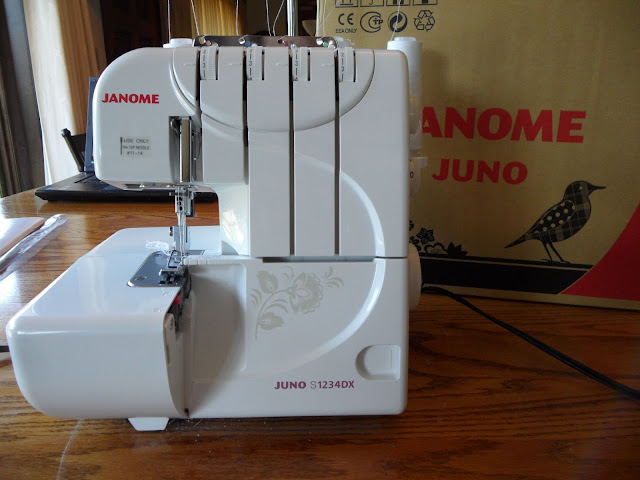 My husband asked me what I had planned for this summer.  What was I going to look forward to and what was going to put a spring in my step?  I happened to mention that I thought I might like a serger.  I did a little research and then off I went to do a little up close and personal research.  And I bought one.  And once I got that sucker threaded, it is a whole lot of fun. 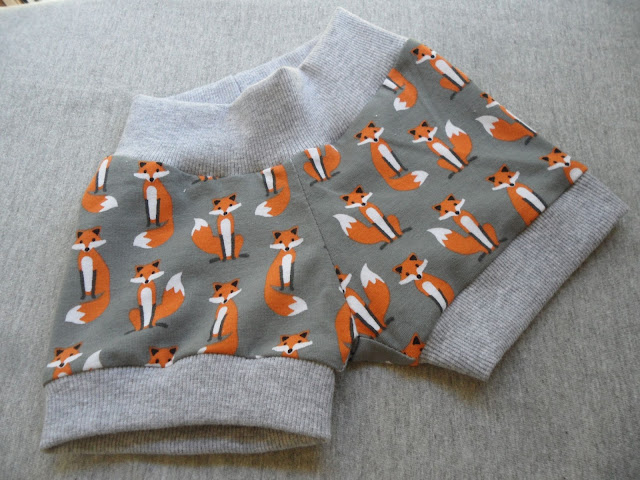 I made these little baby boy shorts in 5 minutes or less.  Oh my goodness.  So much fun.  This is a Brindille and Twig pattern.    And then I made these.  Options.  I tried out two different waist options.  These are a bit of a mash up in terms of the pattern as I did a rub off of a pair and faked them a bit but the wee beanie toque is Brindille and Twig.  So do I blame the purchase of the serger on my husband or on our grandbaby?  I wonder now how I have managed to live without one for so long.  It is just that much fun! 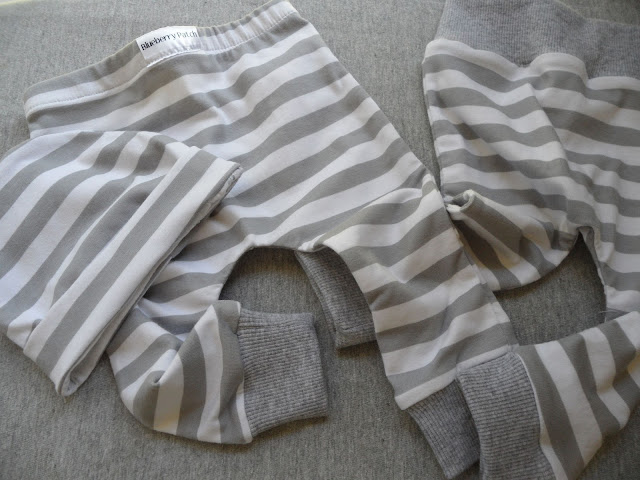 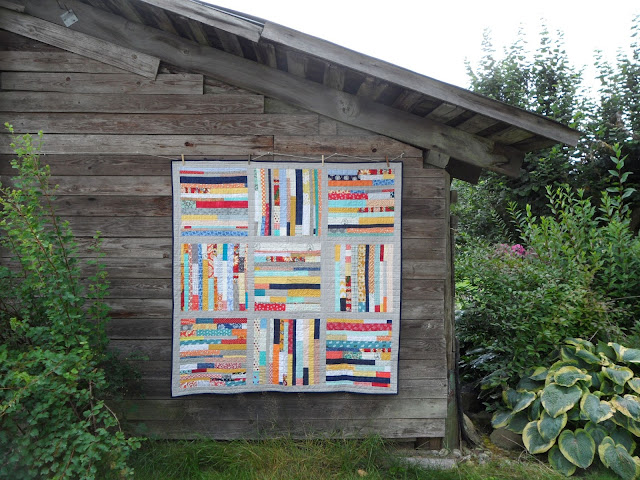 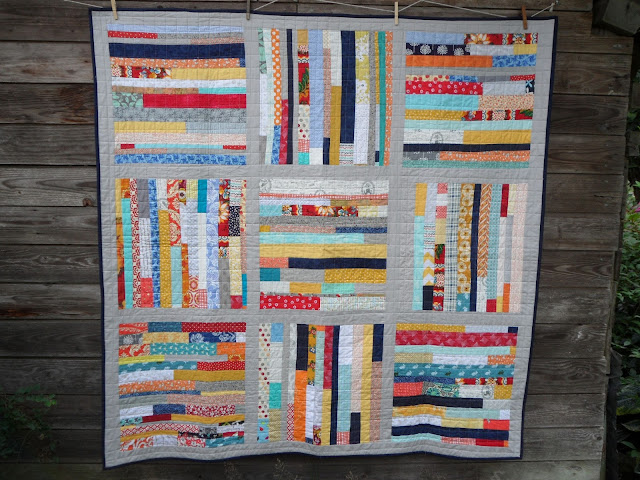 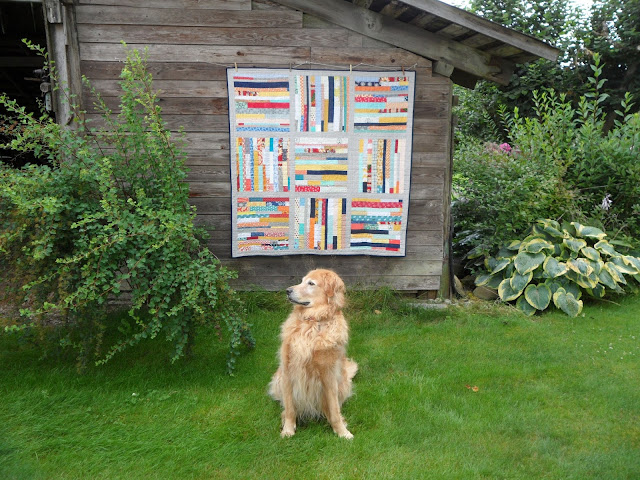 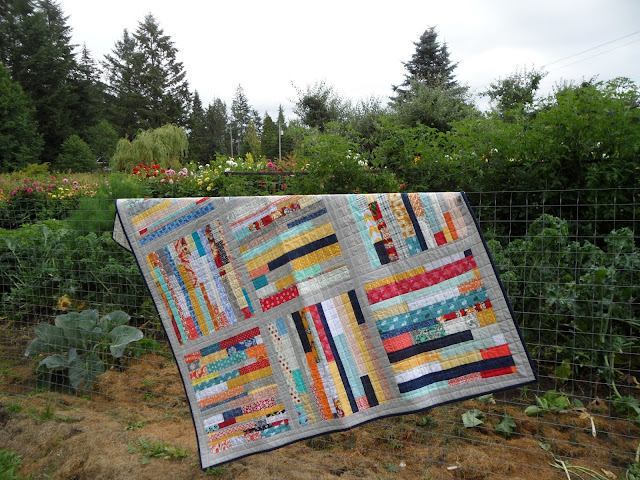 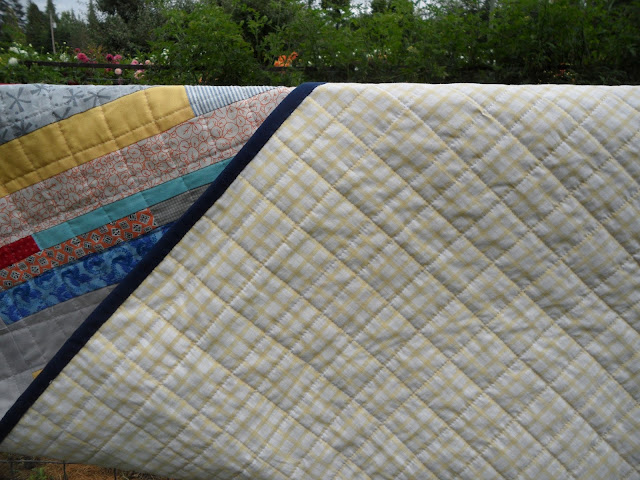 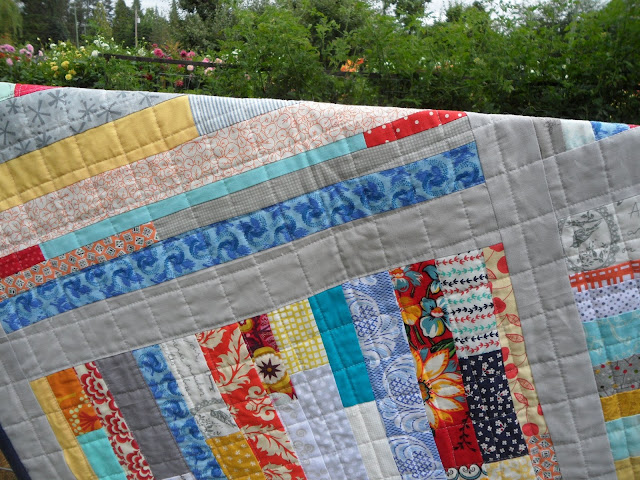 Thrifty Finds and some fabric news at Sew Sisters 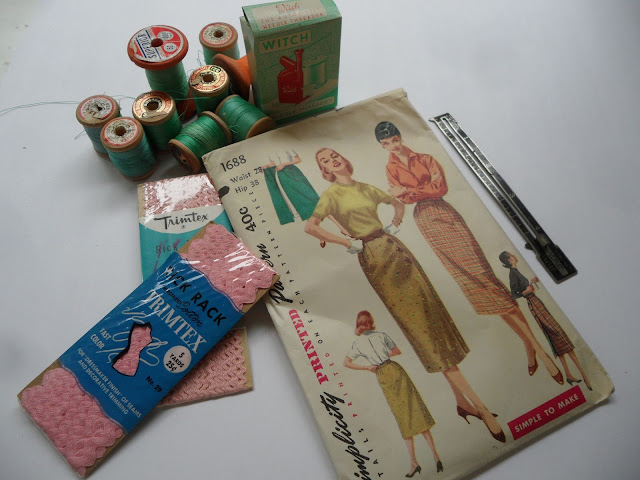 I hadn't been to a thrift shop in ages but I managed a quick visit the other day.  I found some vintage rick rack along with some other treasures.  Don't you love the pose on the pattern?  So stylin'!  I think I will practice that pose.  I am intrigued by the needle threader, complete in the box with instructions.  I have yet to try it.  Something tells me the fact that it is all complete in the box means it did not get a lot of use which could mean that the "witch" is not that great. 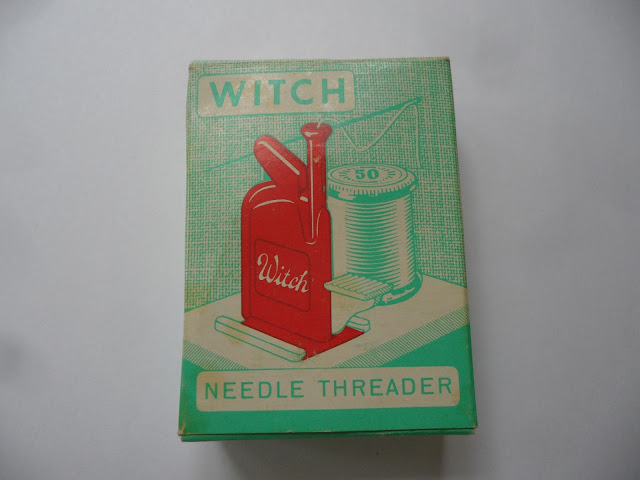 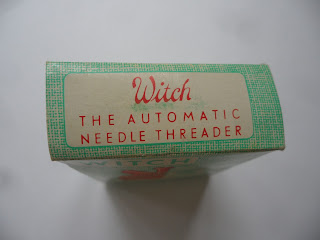 And the fabric news.  Sew Sisters has lots of stuff in their clearance section for as little as $8.99 a metre and some lovely new Art Gallery fabrics by Bari J and Katrina Roccella.  Go have a look.  To die for.  Yep.

Summer is here and so the quilt finishes begin 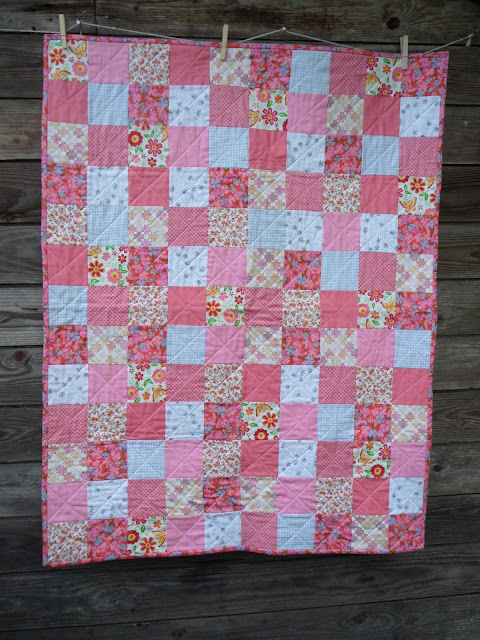 I made another one of these baby girl quilts just to have on hand.  It seems they always find a home before too long.  I had cut almost enough squares when I made the first one so had enough to make a second similar baby girl quilt to put into the stack.  Just a nice little quilt with a mix of modern and even a bit of vintage fabric for fun. I am on holidays now so be prepared for lots of finishes in between all the blueberry picking!

So 4" squares in a mix of prints and solids.  Quilted in cross hatch in Aurifil 50 wt in white. My go to.  Happiness 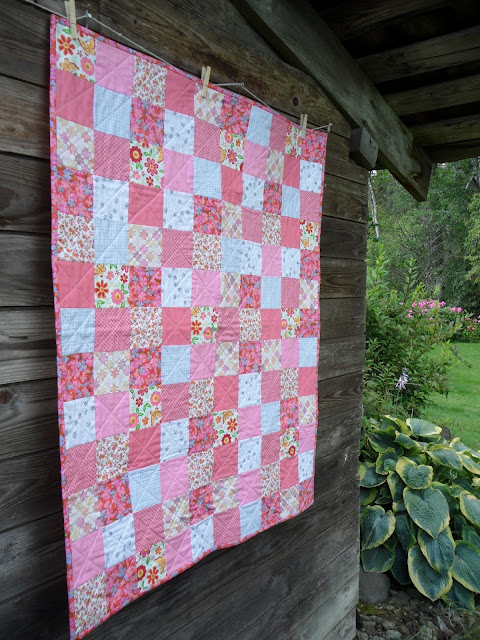 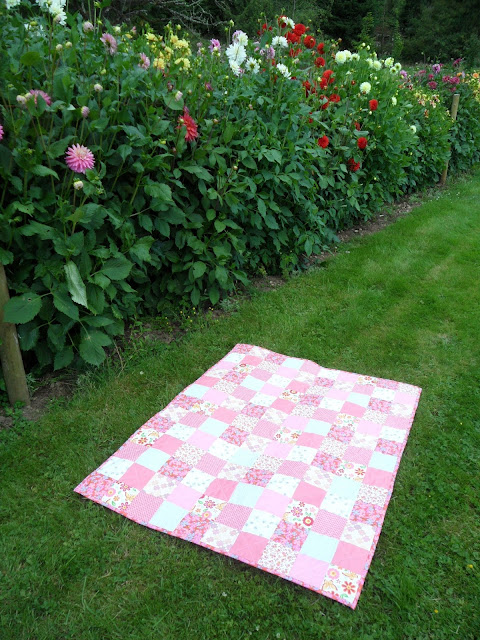 I threw it on the lawn beside the dahlias that we grow in the veggie garden.  The sun was too bright and over exposed the quilt but the dahlias are looking mighty fine!
Posted by Cathy at 3:34 PM 3 comments:

A Bonnet for a boy 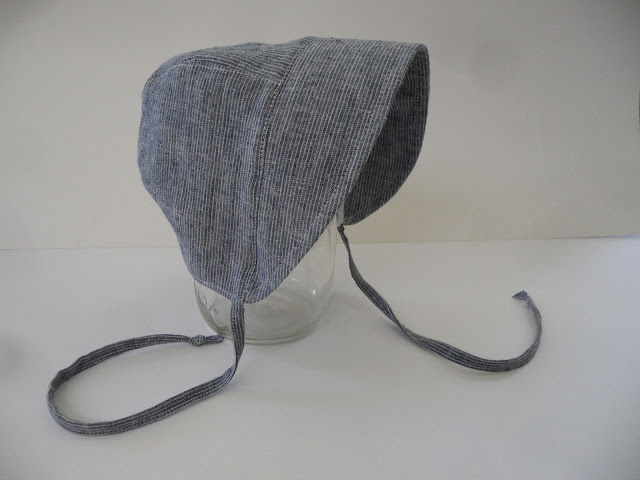 Our daughter decided that our baby needed a bonnet.  Our son in law and my husband thought it was goofy because our baby is a boy.   Husband proclaimed that it is not the 1950s and we don't put boy babies in bonnets but our daughter was pretty determined.  She has been eyeing the bonnets made by Rain People but the one she wanted was sold out.  Gramma to the rescue. I thought this looked a lot like the Purl Soho bonnet pattern so I got busy.  I used a thrifted men's shirt in a striped oxford cloth to make the bonnet more manly.  It sewed up like a dream.  I lined the interior with a lovely light weight white cotton that I have had for who knows how long.  The brim is interfaced.  This is a great pattern.  I am going to pop this in the mail so our baby can enjoy his wee man bonnet when he is out and about in the sun. 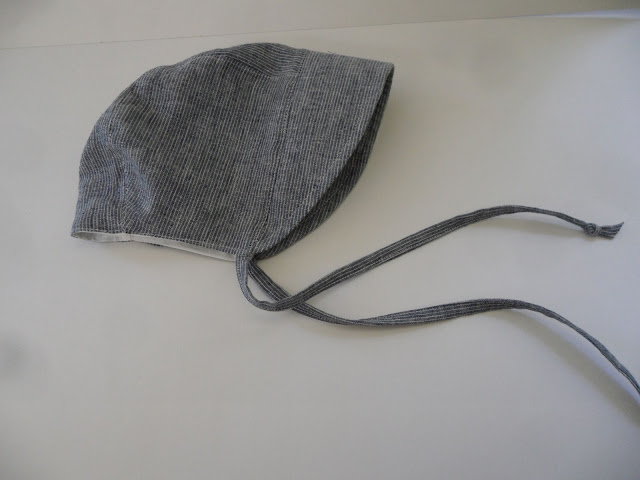 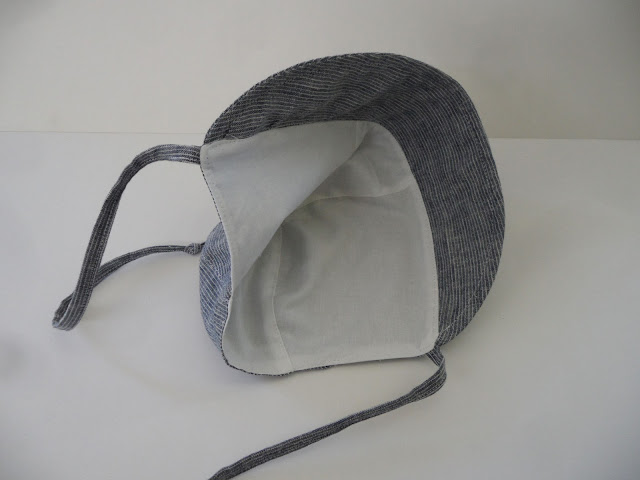 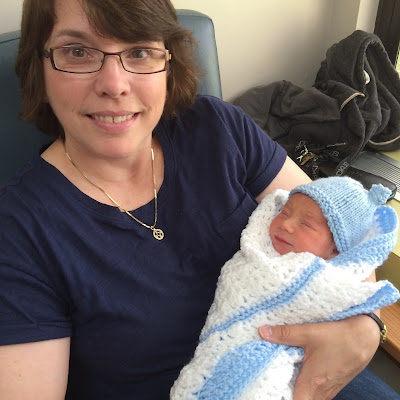 So our wee grand baby was born on July 5 and I have been busy being a Gramma.  We love him to bits.  I got home yesterday and I am counting the days until we see him next.  What a wonderful, wonderful little guy.  And his mummy and daddy are pretty awesome too.

Little Harrison even found his Gramma a quilt shop when he was exactly a week old.  Way to go, little buddy! 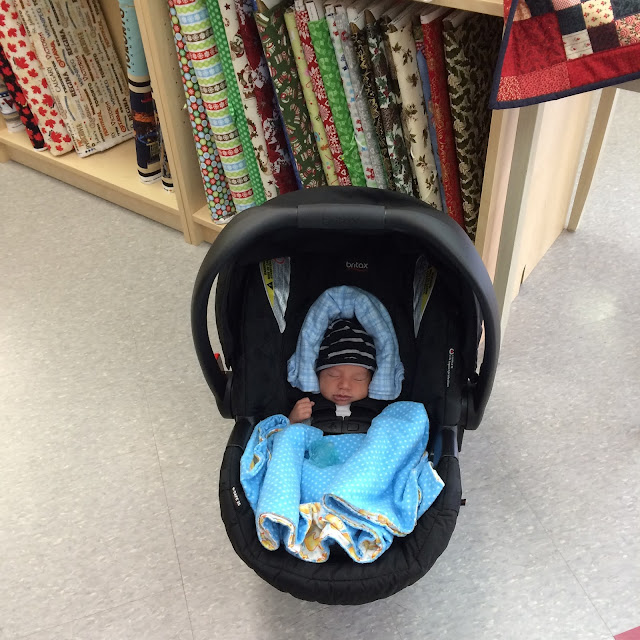 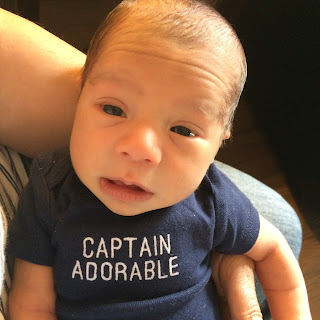 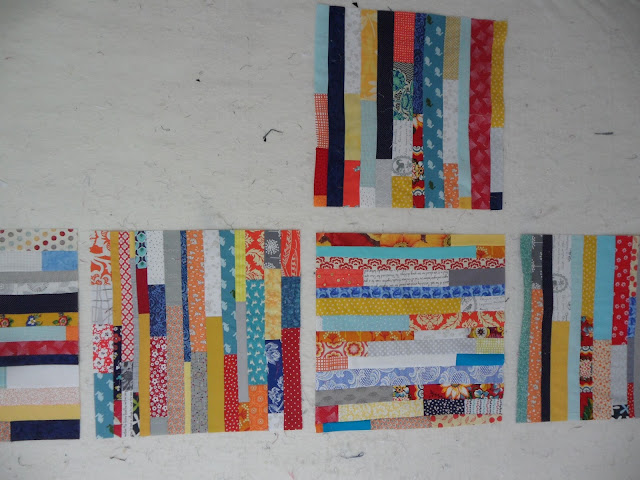 I have to do something with all my scraps.  They are breeding like bunnies.  I saw a picture of a quilt on Pinterest and I used it as inspiration for these blocks.  Supersized at 18" square, these are put together with string scraps of different widths.  Going just from a picture, I did not have an idea how big to make the blocks but big seemed to be the answer!  I am using a controlled scrappy colour palette and I will sash the blocks in grey.  I am aiming to make this a big block big quilt because I want to use a lot of fabric!
Posted by Cathy at 5:30 AM 6 comments:

Email ThisBlogThis!Share to TwitterShare to FacebookShare to Pinterest
Labels: on the design wall, scrap quilt 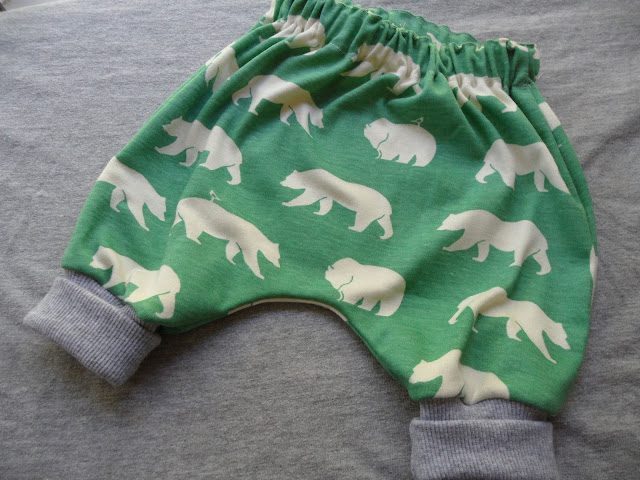 While we are still waiting for our wee grandbaby, I made another pair of pants for the little guy.  This is another Brindille and Twig pattern , harem pants in the smallest size.  Super easy to put together and super cute.  Lots of diaper space in these little pants!
Posted by Cathy at 8:40 PM 3 comments: