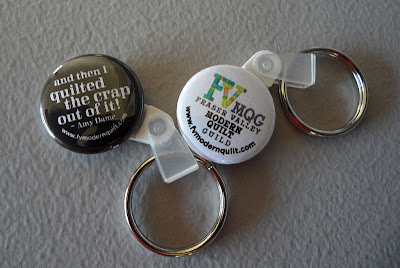 Can you read the key chain on the left?  Hilarious!  I won that at the Modern Quilt Guild Meeting last evening.  "and then I quilted the crap out of it!"  Apparently Amy, one of the members, says that a lot and these are very hot little commodities.  Last evening, I attended my first meeting.  Last evening, we had a HUGE thunder and lightening storm with intense rain.  Undaunted, I braved crazy weather and drove off with show and tell and stash items to get rid of.  I had so much fun!  The show and tell was just great!  Lots of super quilting and great ideas.  I took notes of patterns and ideas.  Inspiration with a capital "I". Like this pattern which  looked totally cool when made up with some Amy Butler fabrics!  Fun, fun, fun!  I didn't take any pictures because I was feeling shy but I know lots of pictures were taken.  They will be over on the website soon enough! 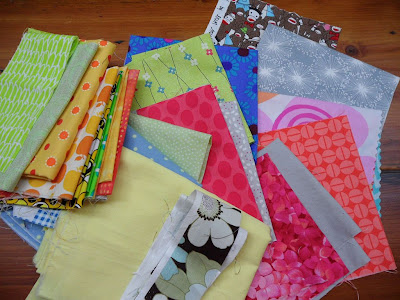 I took a load of quilting magazines and some fabric I decided I could live without and came home with some treasures!  Not a lot, just a little.  I also took this bag of scraps because it was left at the end.  It had some nice surprises in it.  Somehow other people's scraps are so much more interesting than mine! 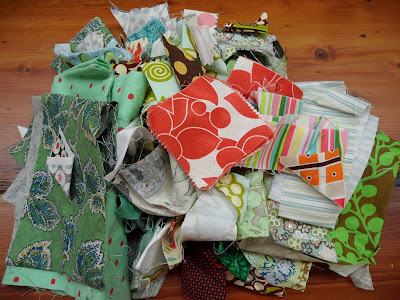 The really funny thing was that I took my wonky scrappy little star quilt for show and tell and one of the guild members said, "hey!  I know that quilt."  Then I mentioned that I do blog and that is how she had met my quilt!  I thought that was really funny.

So there you have it.  What a lovely group of lovely ladies with many, many fabric geeks, just like me! And I have now completed one of my "Just Three" goals for April.

Email ThisBlogThis!Share to TwitterShare to FacebookShare to Pinterest
Labels: fvmqg