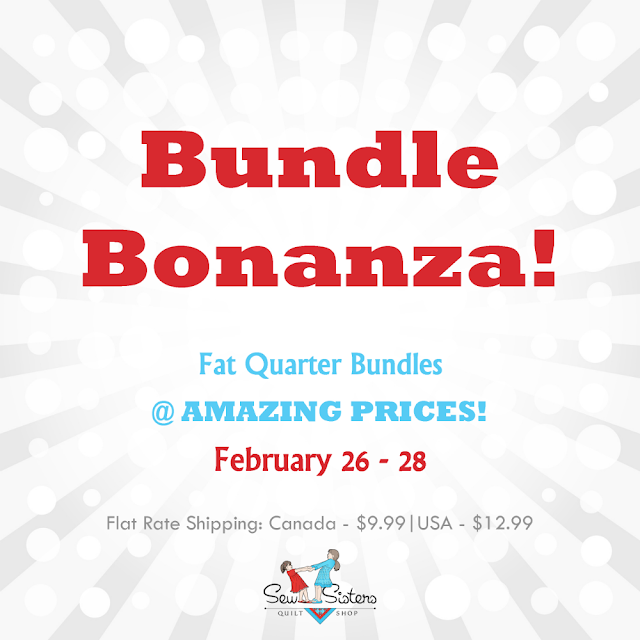 It's A Girl: A quilt finish 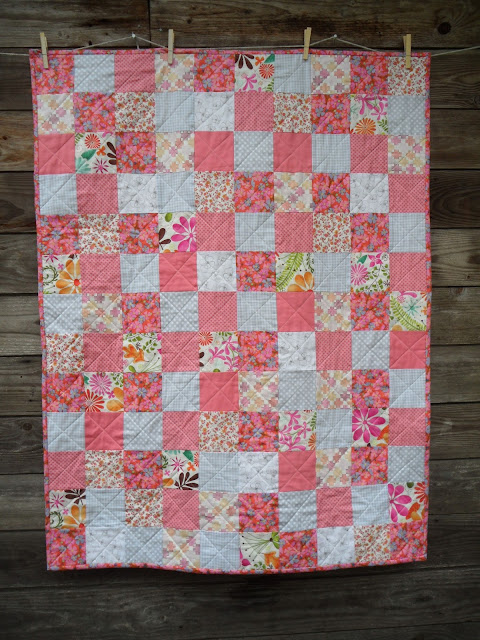 I finished this wee baby girl quilt yesterday.  Just a whole lot of bright pink going on.  One of my teachers is having her third baby and this one is a girl.  Just a simple design of 4" squares with an assortment of fabrics from my stash.  I am totally crushing on cross hatch quilting for this type of quilt.  Just so effective!  I used my favourite Aurifil 50 wt in white.  Fabulous and ready for snuggles.

The binding is a Colorworks floral print that is also featured in the four inch squares.  The quilt added a spark of bright in the yard that is only just beginning the early spring wake up! 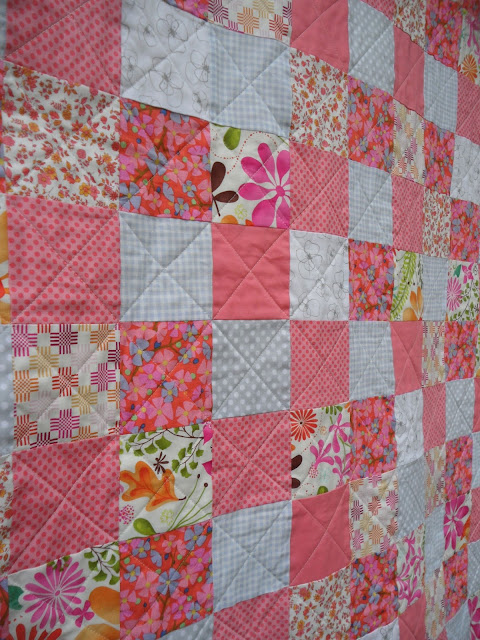 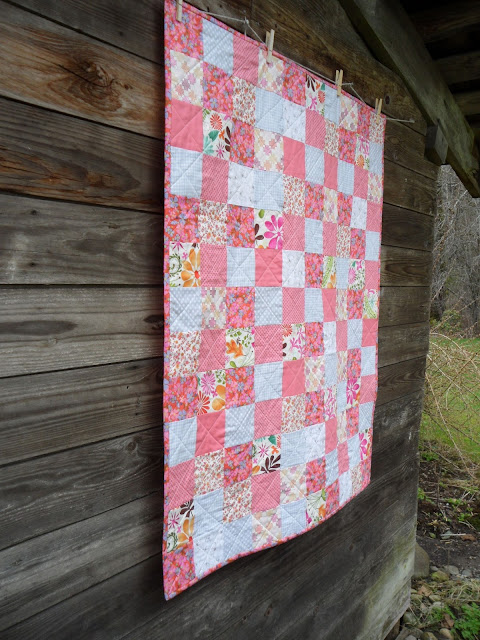 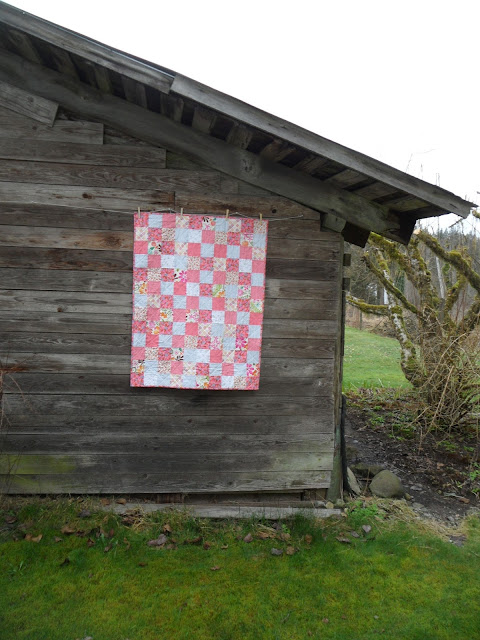 On the Design Wall 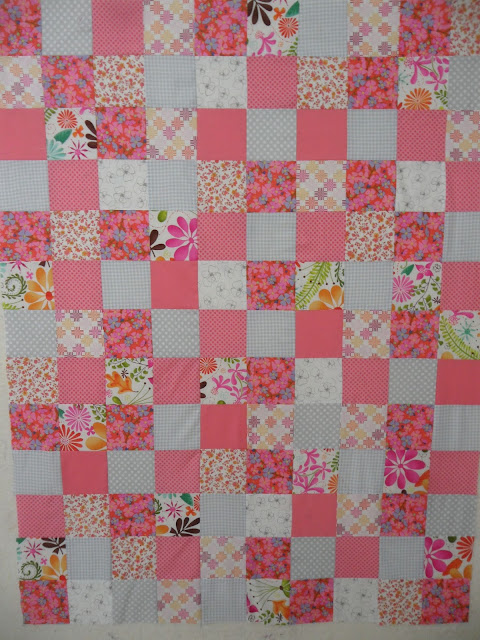 Using 4" squares, this baby girl quilt is  sandwiched and ready for quilting on a frosty clear Sunday morning.  One of my teachers is having a third baby and after two little boys, a pink quilt for a wee girl is just the ticket.  I used some pretty bright pinks but added in some lavender gingham and some soft grey dots for a bit of a rest.  No QuiltCon for me as it just never works for my work schedule but I have been keenly watching the action through Instagram!  Happy Sunday!
Posted by Cathy at 7:31 AM 1 comment:

Email ThisBlogThis!Share to TwitterShare to FacebookShare to Pinterest
Labels: on the design wall 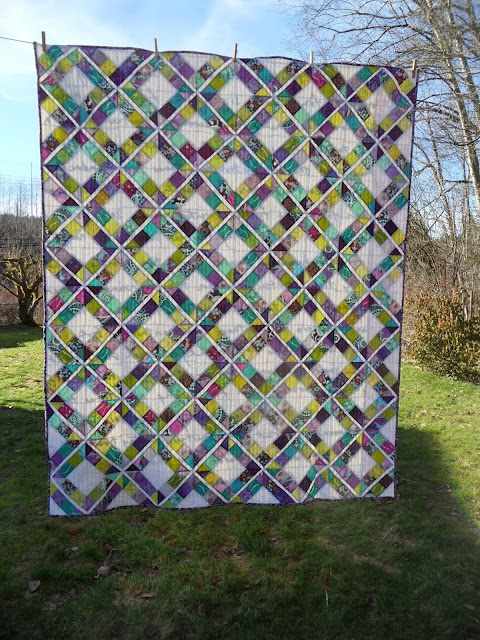 Name: Crocus and Spring
Design: Trellis Crossroads from the book Modern Bee by Lindsay Conner
Size: 63" by 72"
Fabric:  Variety of Prints and Kona White scraps
Quilted: by me with Aurifil 50 wt in white, 4 rows either side of the block seams
Binding and Backing:  Dark purple RJR fabric from the stash and backed with IKEA Britten numbers

This is the second quilt that I have made of this pattern.  It is a fun one.  I was not sure what to call the quilt and then it came to me as I was sitting here. It is all the colours of early spring.  The purple early crocuses, the blue sky and the bright spring leaf green.  I was able to use up a lot of scraps in this one particularly Kona white scraps.  I guess that is the advantage of always using a particular white in quilts.  I know that the scraps are going to all be the same white if I always use Kona white.  I actually buy it by the bolt.

So here it is.  A finish.  I quilted straight lines in four rows on either side of the block seams in Aurifil 50 wt in white.  I forgot to increase the stitch size in the first few rows and I was most annoyed with it so I unpicked the quilting and started over.  I had not got very far so it was not too much of a struggle to unpick and I knew that it would bug me if I did not fix it.  Increasing the stitch length when quilting makes a much nicer final quilted finish in my mind.

I am getting close to the end of my stash of IKEA Britten numbers and if anyone out there is listening that makes these sort of decisions, IKEA please reprint this fabric.  It is the best. 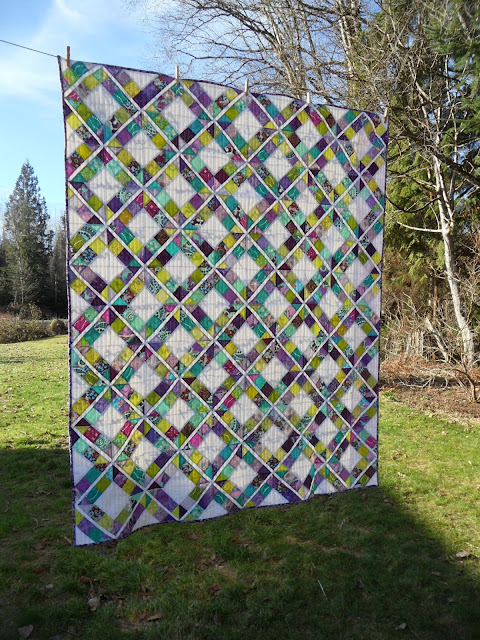 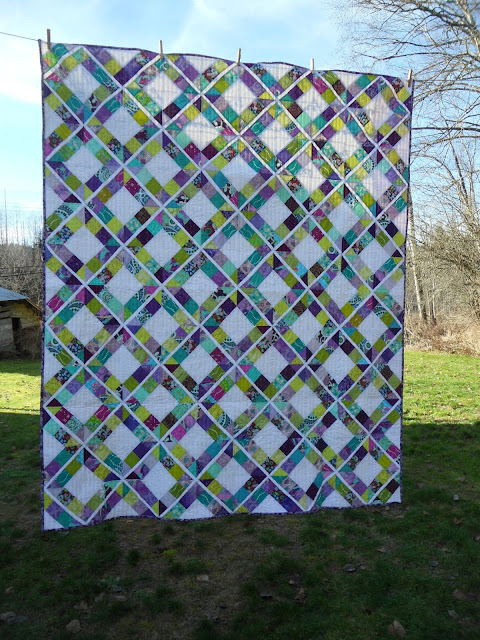 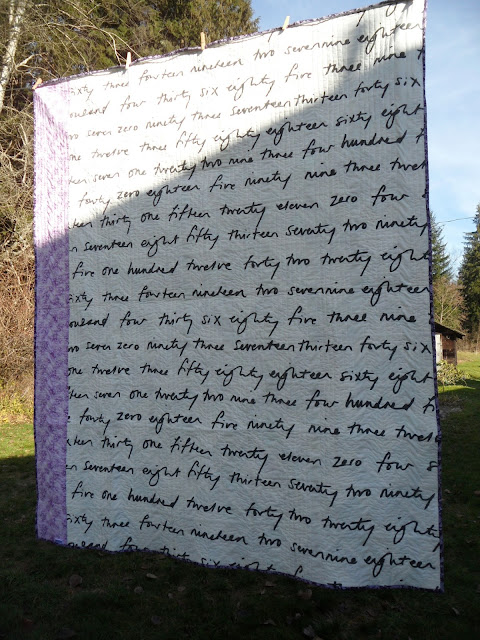 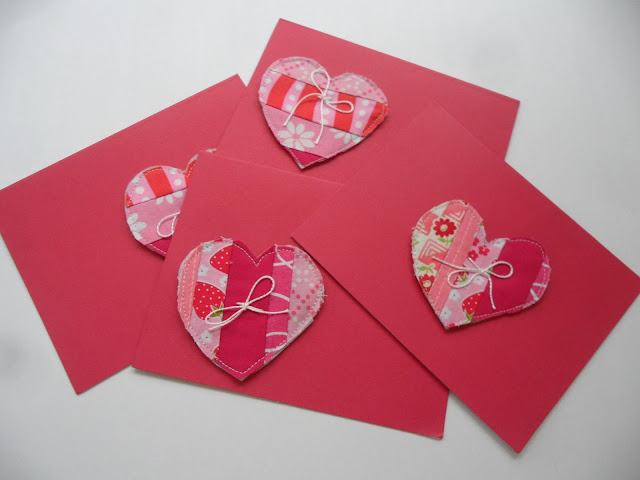 Have a lovely day with your sweetie!
Posted by Cathy at 8:57 AM No comments: 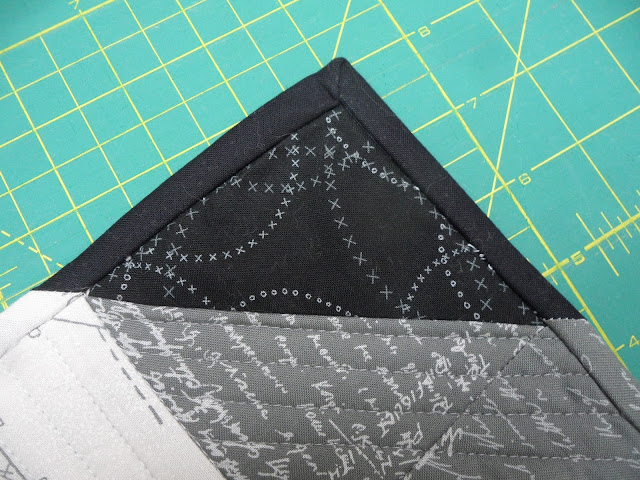 This is the corner of my Steps to Modern Quilting mini quilt for the FVMQG challenge.  After I posted about it, one of the guild members mentioned that she could not see where I had used the required solid fabric for the challenge.  Drat.  Fiddlesticks.  Etc.  So... I replaced one corner of the binding with Kona Black to meet the rules of the challenge.  Must include at least one solid.  Note to self, read the fine print even if the cat keeps sitting on the paper.
Posted by Cathy at 5:30 AM No comments: 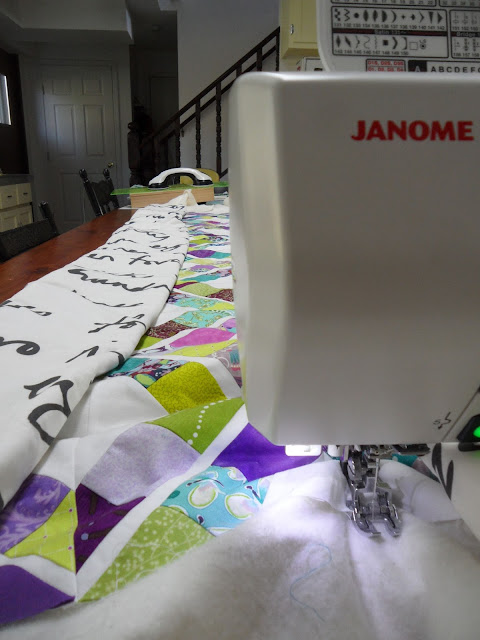 I quilted this on Monday.  It was our family day long weekend so I had an extra day for sewing.  I took this picture because every time I quilt a big quilt, I realize how lucky I am to have this giant harvest table in my sewing room.  It makes my life so much easier.  My sewing machine table butts up against the end of the harvest table.  It works so well! 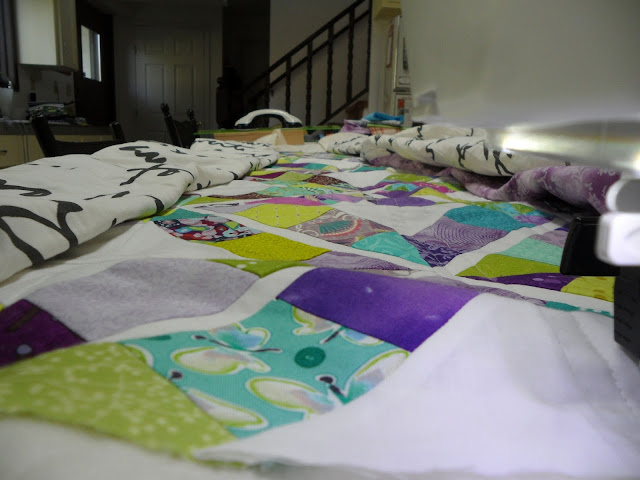 And the quilt inspector, Lucy, was being so helpful while I was trimming the quilt after quilting. 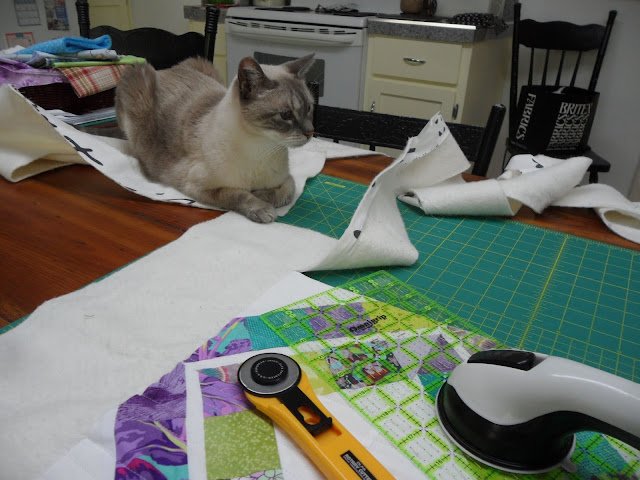 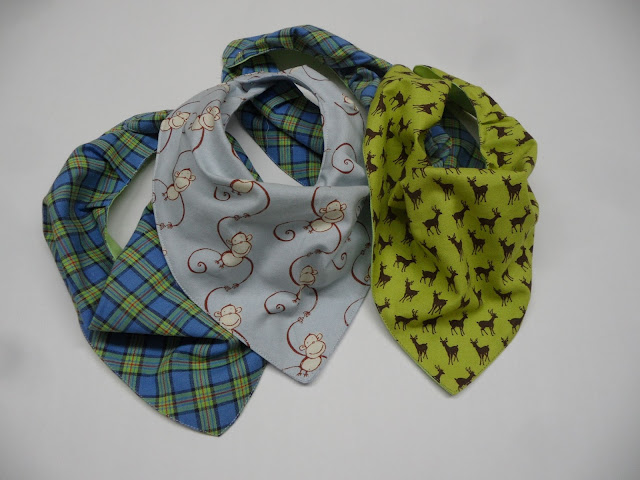 We are going to be grandparents in July.  This is most exciting as it is our first and we found out the other day that our daughter is having a wee boy.  I have been waiting to start the sewing until we knew what to expect.  I wasted no time this weekend.  I made receiving blankets, bibs and baby bandanas.  SO MUCH FUN!   I used this tutorial for the bandanas.  And I noticed another tutorial at the Purl Bee.  I will try that one next.
Posted by Cathy at 3:35 PM 9 comments: 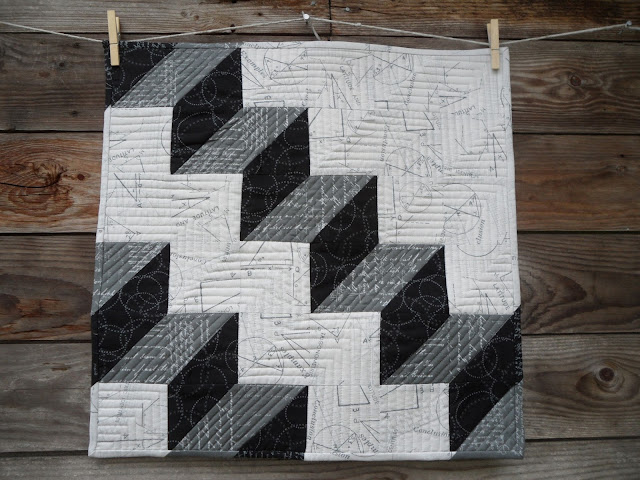 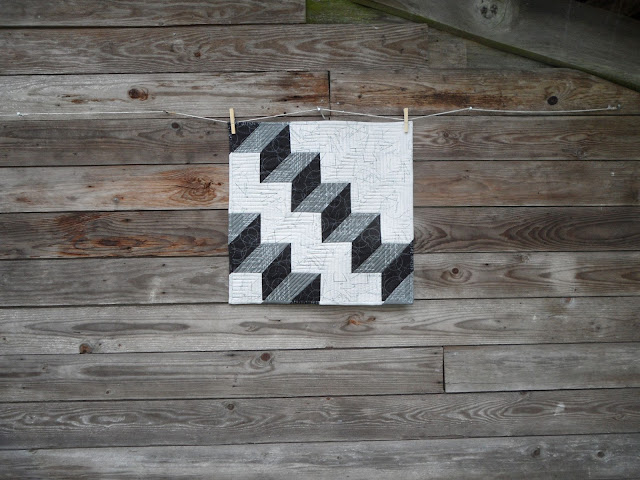 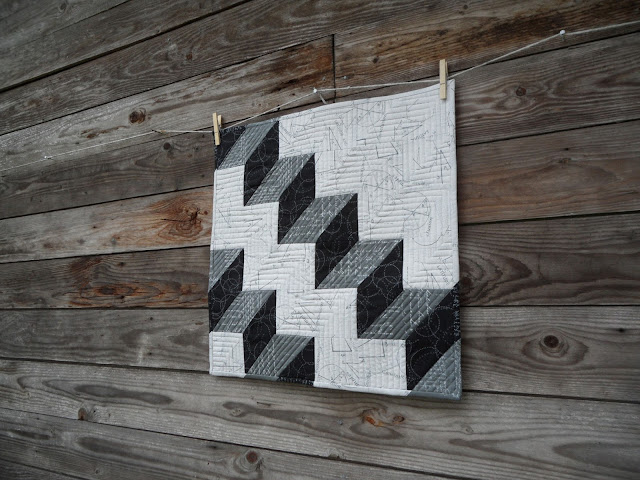 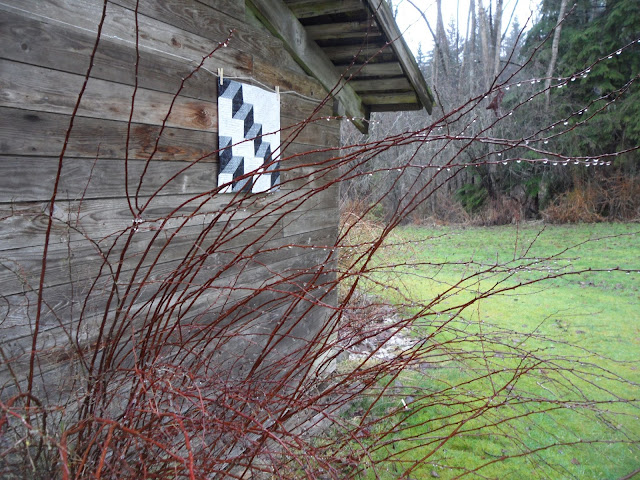