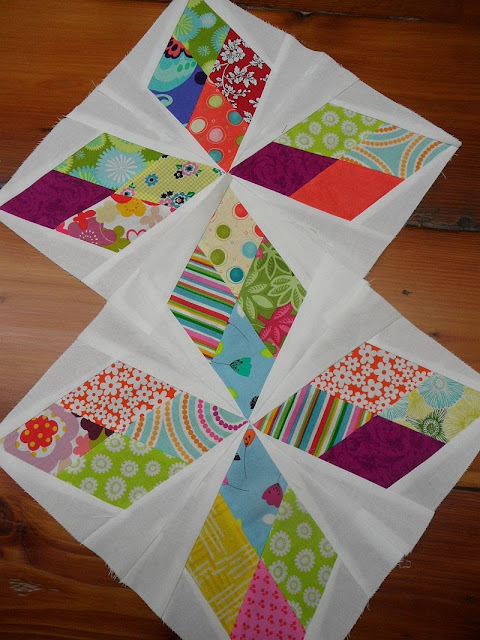 This month we made Arkansas Traveller blocks for Kelsey using the tutorial at Freshly Pieced for the That Stash Bee.  She wanted us to think bright and scrappy so that is what I did.  I have to say that the blocks went together quite nicely.  The first one I made was not nice enough.  I sort of messed up.  Sometimes directions tell you to take the paper off before you sew the quadrants together and other directions tell you to leave them on.  Let me just say that leaving the paper on for these blocks is a good idea.  Yep.  So I made another one, leaving the paper on this time.  Much better.

Other than that I received a lovely email from Rachael who blogs at Rachael Rabbit.  She was wondering about the fabrics I used in my I Spy quilts.  This can be a challenge if you don't have much of a stash.  I have been very lucky with blog friends sending me I Spy type fabrics over the years.  I was helped out initially by Riel when I won a giveaway of her scraps and Jan-Marie in Australia sent me a stuffed envelope of scraps which I still use in my I Spy quilts.  I also happen to have a really big stash with lots of novelty fabrics.  And just recently, Brenda, offered to send me some of her I Spy squares.  So I thought I would help Rachael with a little bit of "pay it forward" and send her some I Spy fabric to get going.  I stuffed and envelope full of fabrics.  Rachael had an idea to make some I Spy quilts for charity so if anyone else can send her a bit of novelty fabric scraps she would be ever so grateful. She is planning for 4" squares. I know that these quilts do very well at charity events.  The one I donated helped raise over $700.  So have a look at Rachael's blog and see if you can help her out a bit.

Email ThisBlogThis!Share to TwitterShare to FacebookShare to Pinterest
Labels: that stash bee