Can you believe it????  Week 19.  I am most proud that I have been churning these little guys out each week even though summer is over and I am back to work full time.  This week's blocks were fun! 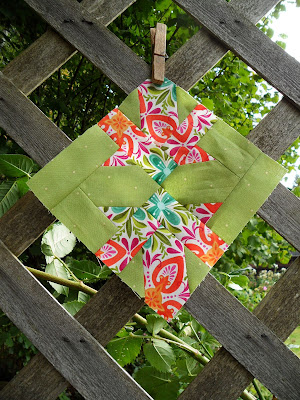 For this block, I used a barely spotted green and some Terrain!  I bought a sample scrap bag of Terrain awhile back before it was even released.  So pretty and vibrant.  It was a bit breezy when I took this picture! 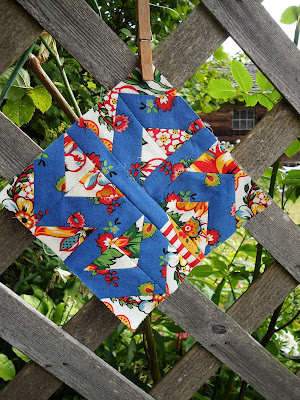 Again, I am using scraps.  These are some scraps of Le Petit Poulet by American Jane for Moda.  I bought these scraps as samples too before the line was released.  I did not have quite enough of the blue to get the centre strip to be all blue.  There is a bit of the border print showing with the red stripes but that is okay.  I stressed about it for a bit and then decided what the heck, I am being too fussy!  This block is way less complicated than it appears.  A nice pop of colour!

The stack of these blocks is now significant.  Almost time to throw them all out to see how they play together!

Have a lovely rest of your day!
Posted by Cathy at 5:52 PM