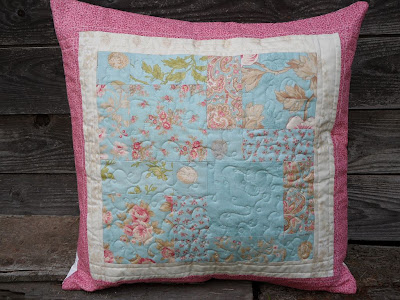 I made a pillow yesterday for a year end gift for my lovely secretary.  She is just a wonderful lady.  Very feminine and a grandmother to a great many lucky grandchildren.  I used a charm pack of April Cornell's Aviary from years ago.  Soft and pretty.  I made a disappearing nine patch block for the front in some of the blues and framed it up.  I used a variety of quilting on it.  The blue disappearing nine patch was treated to a meandering small loop free motion in Aurifil 50 wt in Bluet.  The frame got some straight lines and I heavily quilted straight lines on the cream on cream on half of the back. I used Auriful 50 wt in an off white for that.   I used some of the pink charms on the back in a straight forward patchwork.  That got Straight lines in cream on either side of the seam lines. 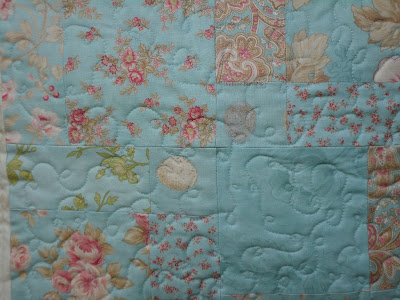 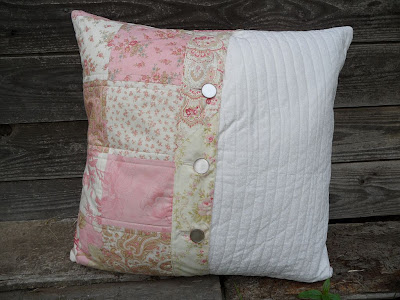 I found some pretty vintage buttons for the back and used some scraps of something or other for the flap with the buttonholes.  I used batting on both the front and the back to give the pillow a nice structure.  It finishes at 20" square and I used one of my thrifted pillow forms from the weekend.  I think it will suit!

A pretty pillow for a lovely lady.  Linking up with Sew Modern Monday and Fabric Tuesday at Quilt Story.
Posted by Cathy at 5:58 PM

Email ThisBlogThis!Share to TwitterShare to FacebookShare to Pinterest
Labels: pillow