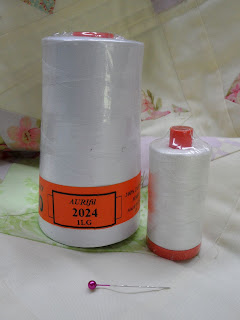 Eeek!  Blogger has been offering up a new interface but I most politely declined by ignoring the nice little invitation showing up on the dashboard.  And then Blogger became most devious last evening by forcing the new interface upon me.  Good grief!  It certainly looks pretty and up to date and fancy and all that but  where the heck is the new post button!  Eeek!  I found it.  I will just have to cowgirl up and get used to it!

Husband and I were out and about this morning but thrift stores were more or less a bust.  I even overheard the worker bees saying that they had no new stock in the back.  They were tossing around ideas on how to entice more donations.  Come on people!  Clean out your unwanted crappola!  I did, however, find two lovely vintage sheets but I have not yet taken any photos of them.  I think they will both come in handy as potential quilt backs.

And finally, I did want to show you what happens when Aurifil thread grows up.  The big cone is HUMONGOUS and I am so happy to have such a GIANT cone of lovely white thread!!!!!  The spool on the right is the 1500 metre spool.  You know, the one I used to think was a large spool of Aurifil.