A couple of things.  First of all it was kind of nice to be back at school today!  And, thanks to the weather gods, the rain held off enough long enough for us to get all the kids outside at lunch time.  Phew!  I don't know about the saying about March's weather.  I think we are heading out of March like a lion too.  With a heavy rain warning in place!

I also had a mind blowing moment when daughter reminded me, on the phone, that she is finished, finished, finished with her nursing degree as of April 4!!!!!!  I cannot believe it.  She will still have her registered nursing exam in June but otherwise she is done!  Our little baby is all grown up! 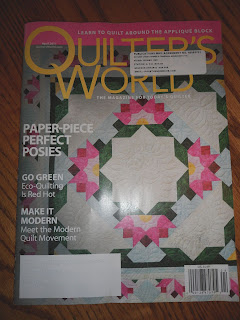 Quilty mail arrived while I was away.  The most recent edition of Quilter's World has a really great article written by Jacquie Gering who blogs at Tallgrass Prairie Studio.  It is all about modern quilting.  Nice!  And speaking of quilting magazines.  I kind of like this one.  I was having trouble finding a magazine that I liked consistently and that I liked more than just one thing in the magazine.  So Quilter's World isn't bad.  It's just not perfect.  If I was in charge of the world, a quilting magazine would have more articles, more stuff about fabric, a focus on techniques and less patterns.  Which is really what blogs are like, aren't they? 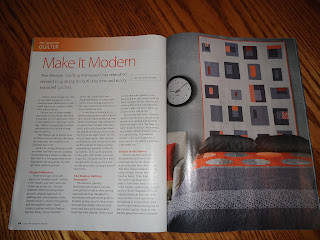