So thanks to some great advice on some blogs that I follow and thanks to my great LQS, I have 2 new best friends. 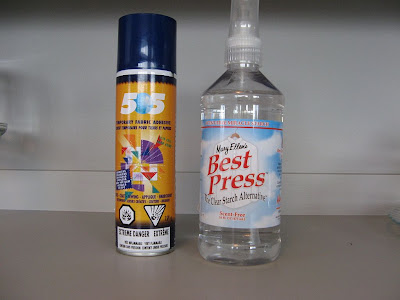 I bought the Best Press spray before I got my lovely new Rowenta iron but even still this stuff is awesome!  I found it really great when making the Feeling Blue quilt because I was using such a mix of fabrics.  That is not all new, not all quilting cotton etc.  so the added benefit of the spray starch was just super helpful.  So there.  Good stuff and it goes a really long way.  Look, my bottle is still almost full and I have been using that bottle for almost a month.

And my second new best friend is none other than 505 spray baste.  I sort of thought whatever, what is that matter with pins, people?!  But I was just so stressed about quilting such a big quilt and I was getting tired of little wrinkle burbles on my quilt backs despite careful pinning.  ARGH!  CURSES!  So I gave it a whirl.  And I still have a lot in the can even after using it on the blue beast.  I would say I easily have half a can left so I will get another quilt or two out of it and it is just so worth it.

I have found a lot of price variation.  I don't know how much it costs across the border to the south, but I paid $16 ish at my fabulous local quilt shop.  Interestingly, it was almost $10 more at the generic fabric chain store.  Talk about crazy!  What is that about?  And for my trial and error, lesson learned explanation of using spray baste, you can check this post... just so you don't go through what happened to me!  And last piece of advice, you really can spray it lightly.  You cannot see the spray, but trust that you have sprayed enough.  Lightly is lightly.  Just a pass with the can.  It will be enough.  Husband recently painted the whole main floor including ceilings.  He had this ceiling paint that goes on pink and dries white.  If I was in charge of the world, I would do the same thing with the spray baste so that you can see where you have sprayed.

Email ThisBlogThis!Share to TwitterShare to FacebookShare to Pinterest
Labels: quilting