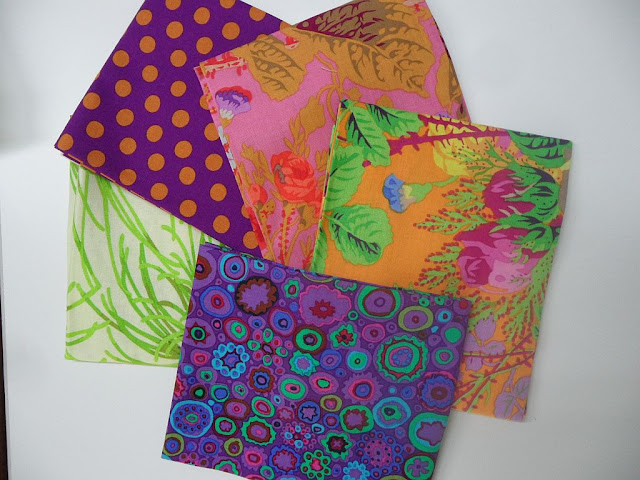 Some fabric followed me home from Jasper.    I do love the paperweight print.  Kaffe Fasset just has such a way with colour.  And there is a Martha Negley green on white print hiding under the dots on the left.  Yum!

Sew Sisters Quilt Shop in Toronto and with a big on line presence, have invited me to be a host blogger during their blog event in November.  (Imagine me now doing a happy dance!)  Of course I said, yes!  Actually I think I squealed, "Yes!"

I noticed a really snazzy quilt pattern in Quilt Magazine.   The December/January issue just arrived in the mail and while the magazine tends to have more traditional quilts, this one is MODERN!   It is called Make it Modern and was designed by Corey Yoder and quilted by the amazing Angela Walters.  It is really awesome in its simplicity.  I think it is on my must do list.

Who invented Magic Bags?  I would like to give them a hug.

So there.  Random.  Linking with Cindy for Random Thursday.  I love this link up!
Posted by Cathy at 4:03 PM