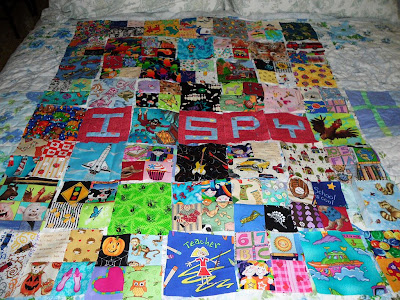 Okay, here is version 2.  Jan-Maree suggested plopping the I Spy letters in the middle.  I never thought of that but I like it!  Husband said, "Ya, that makes more sense since it will be hanging on a wall." What planet have I been living on that I never even thought of that.  Thanks, Jan-Maree!!!! Great idea.

Tomorrow is the Terry Fox National School Run Day for cancer research in Canada.  My school will be out in full force tomorrow afternoon, walking and running to support Terry's legacy.  We have been running for Terry for such a long time now (31 years I think!) and so much money has been raised for cancer research in Terry's name.  It is amazing to see what an ordinary person fighting an extraordinary battle can do when they set their mind to it.  Several people asked if we would put the run off if it is raining.  This is one thing that we will do no matter what the weather.  Rain or shine.  That's what Terry did.  My school has set a donation goal and I am thinking that we are going to blow the goal out of the water by tomorrow.  And that is a good thing.

"Dreams are made possible if you try."
Terry Fox

Have a super rest of your Tuesday!
Posted by Cathy at 6:00 PM